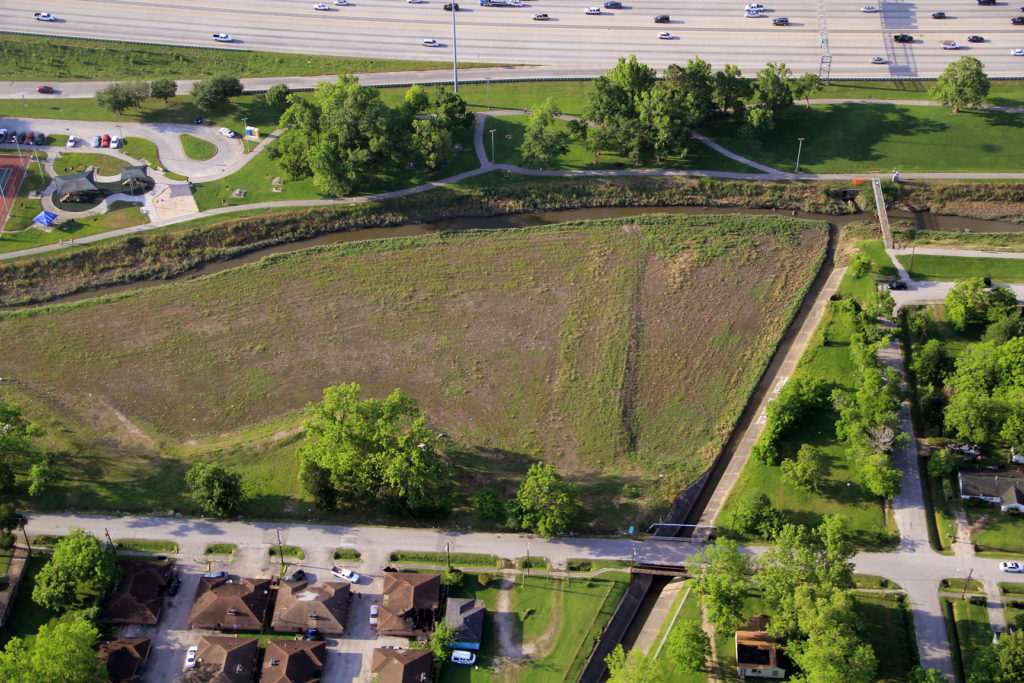 The Harris County Flood Control District has begun construction on a project to widen an additional section of Hunting Bayou in the Kashmere Gardens neighborhood of central Harris County. This is the second of multiple segments of Hunting Bayou that will be widened and deepened between US 59 and North Wayside Drive to reduce the risk of flooding.

The current project site is located along Hunting Bayou in two sections, from the North Loop 610 East Freeway feeder road near North George Street to Lockwood Drive and from Hoffman Street to Dabney Street. On May 10, Harris County Commissioners Court awarded the approximately $1.7 million construction contract to Serco Construction Group Ltd. Work began in July and is expected to be completed in early 2017.

The work will involve excavating and removing approximately 109,325 cubic yards of soil in various locations along Hunting Bayou to create gently sloped terraces – or benches – within the channel that will vary in width from approximately 40 to 140 feet. During periods of heavy rain, these benches will provide additional capacity for holding excess stormwater that otherwise might flood homes and businesses. To accommodate the benching, North George and Hickman streets have been permanently closed and will be demolished. The project also will modify cul-de-sacs on both sides of the bayou at Los Angeles Street, on the south side at Lavender Street, and on the north side at Kashmere Street.

This second phase follows similar benching work that was completed in March 2014 along a section of the bayou between Lockwood Drive and Hoffman Street.

During this phase of construction:

A pedestrian bridge at North George Street will remain open. The existing trail on the south bank of the bayou in the construction area will be closed, demolished.

Excavation along the top of bank will be varied in order to save a number of mature trees. As excavation progresses, the area will offer varied opportunities for recreational uses, including new or expanded hike-and-bike trails.

Benching is an interim step in the overall $165 million Hunting Bayou Flood Damage Reduction Project, commonly known as Project Hunting, which calls for widening and deepening 3.8 miles of Hunting Bayou from US 59 to just downstream of North Wayside Drive, replacing or modifying approximately 17 bridges, and excavating the Homestead Stormwater Detention Basin in several phases. As of early 2016, a project to both widen and deepen a third segment of Hunting Bayou, and to construct the third phase of construction at the Homestead basin, are both in design.

In late 2014, the U.S. Army Corps of Engineers and the Flood Control District entered into a Project Partnership Agreement for the Hunting Bayou Federal Flood Risk Reduction Project. The Partnership Agreement allows the Flood Control District to qualify for federal reimbursements for work completed on Hunting Bayou. While federal funding is not certain, Project Hunting has a chance to receive funding, if it is approved by the federal government. Whatever federal funding is received will be used to build additional segments of Project Hunting.