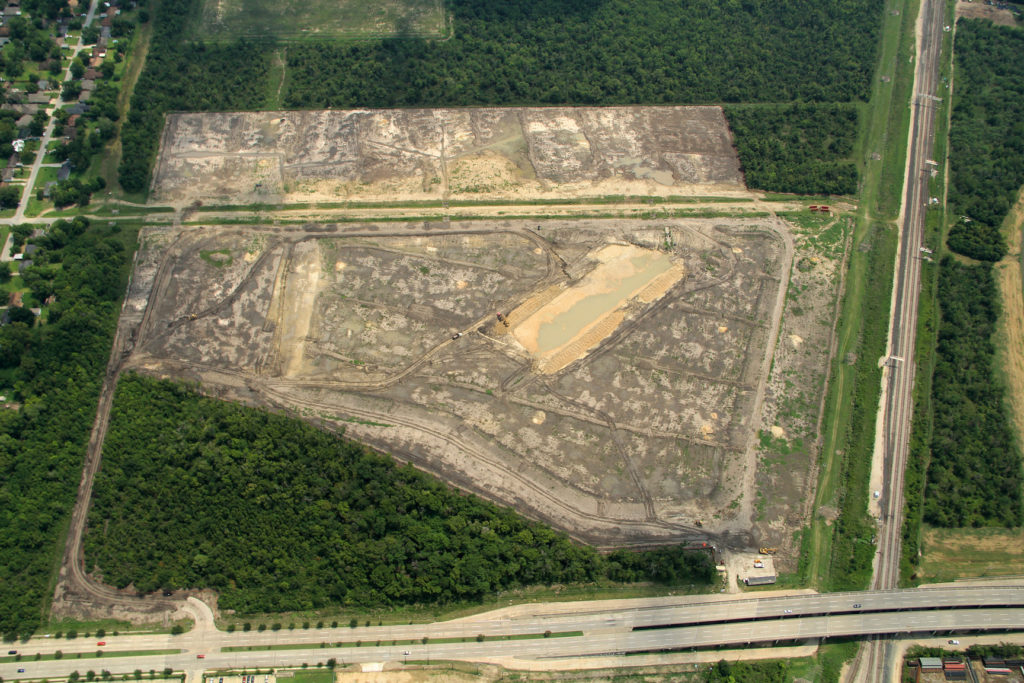 The Harris County Flood Control District has begun a second phase of excavation at a stormwater detention basin in northeast Houston that will reduce flooding risks for neighborhoods and businesses near Hunting Bayou.

The basin, formally identified as H500-01-00 and commonly known as Homestead Stormwater Detention Basin, is located northeast of the North Loop 610 and Homestead Road intersection. The basin sits on a 75-acre site just north of Hunting Bayou and west of the Union Pacific Railroad Company’ Settegast Railroad Yard. It is a part of the overall Hunting Bayou Flood Damage Reduction Project, commonly known as Project Hunting.

Construction on the first phase of the Homestead basin was completed in 2009. The Flood Control District removed 265,000 cubic yards of soil during the first phase, at a cost of approximately $1.25 million.

During the upcoming second phase, an additional 647,000 cubic yards or more of soil will be removed from the site. This excavation will more than triple the capacity of the Homestead basin to approximately 564 acre-feet, or 184 million gallons of stormwater. The project also includes installation of an additional culvert connecting the basin to the bayou under the Union Pacific Railroad tracks.

On March 12, 2013, Harris County Commissioners Court awarded an approximately $5.7 million contract for the Homestead basin project to Serco Construction Group Ltd. Construction. The project began in mid-May and is expected to be completed in 300 working days.

Project Hunting calls for widening and deepening 4 miles of Hunting Bayou from US 59 to just downstream of North Wayside Drive, replacing or modifying approximately 20 bridges, and excavating the Homestead basin in three phases.

Stormwater detention basins reduce flooding risks and damages during heavy rain events by safely storing excess floodwater and slowly releasing it back to the bayou when the threat of flooding has passed. The Homestead basin in conjunction with the future channel construction will help reduce flooding risk for those who live near the bayou, predominately in the Kashmere Gardens and Liberty Gardens areas. When the final phase of excavation is complete, the Homestead basin will hold approximately 1,000 acre-feet or 326 million gallons of stormwater.