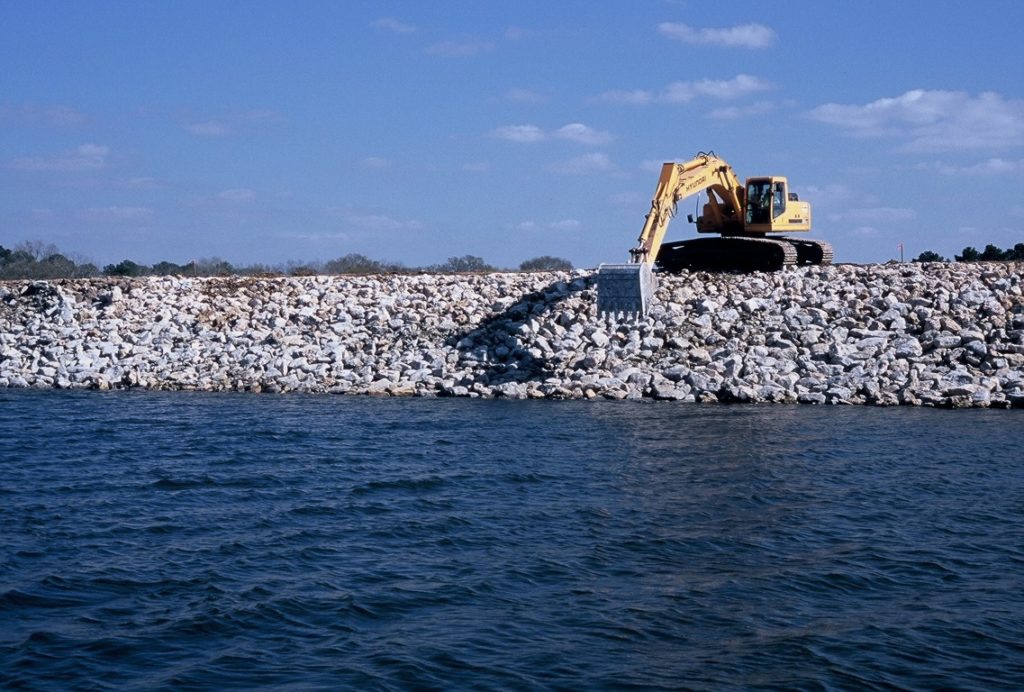 Repairs to Lake Conroe’s hurricane-damaged dam are about 30 percent complete and well ahead of schedule.

“Looks like we are going to have to pay (Serco) the $30,000 reward for finishing ahead of schedule, and we’re plenty happy about that,” said Blake Kellum, who manages Lake Conroe for the San Jacinto River Authority.

Hurricane Rita’s assault in late September whipped waves up to an unprecedented 8 feet.

The waves, coming from the north, slammed into the dam, washing aside a concrete riprap protective barrier and dug down to the structure’s clay core, creating a 3,000-foot-long scar across the dam’s face.

“The first 1,000 feet of the damage has been repaired, so the work is moving along faster than we expected,” Kellum said, noting a lack of bad weather has assisted the project’s progress.

Although damaged, the integrity of the core — and with it, the dam — was never threatened.

As a result, though, the SJRA dropped lake levels to more than 4 feet below the lake’s normal pool level of 201 feet above sea level, stranding countless vessels in their lakeside boathouses, aggravating homeowners and, for the first time in years, actually creating beaches along the lake’s perimeter.

“We’re hoping that the progress being made right now on the dam’s repairs will let us resume normal levels before much longer,” Kellum said.

Back to normal soon

Completion of the work has been set for April 18, in time, most likely, for late spring rains that would help recharge the lake and bring levels back up in time for the upcoming summer season.

Houston-based Serco is doing the work, coming in as the lowest bidder, saying it could do the job for $1.6 million.

That work includes repairing the dam’s core, replacing the various levels of sand and earth wiped away by the storm, and then replacing the concrete riprap barrier with larger chunks of concrete, this time going with 36-inch square sizes rather than the 24-inch chunks used originally.

“Engineering tells us that using the larger riprap will provide an extra margin of protection, should we experience similar storm conditions in the future,” Kellum said.

“Lake Conroe is a vital water supply for Greater Houston, and it is a significant tourism draw and economic driver for Montgomery County,” Brady said. “Repairing the dam to pre-Hurricane Rita levels is a top priority, and the San Jacinto River Authority has acted quickly to make sure these repairs are made as soon as possible.

“The federal grant will help them continue their work,” Brady said.

Barbara Shelabra , who manages April Plaza Marina, said her business has taken a hard hit because of the low lake levels.

“No doubt … our business is suffering because the lake levels,” Shelabra said. “But, it’s not as bad as it could be, and it’s the same with all the other businesses. If the lake (continues to drop), we’ll all be in a serious world of hurt.”

Kellum, while sympathetic to the dilemma faced by Shelabara, property owners and others, said the priority is to make sure repairs are done correctly.

“We cannot risk improper repairs, and we do recognize the impact of keeping the lake this low during this time of year,” Kellum said previously.

Serco is shortening that time. “We are confident the repairs are going to be completed well ahead of schedule and the lake levels restored much sooner than anyone expected,” Kellum said. “We are very thankful for that and encouraged by the results so far.”